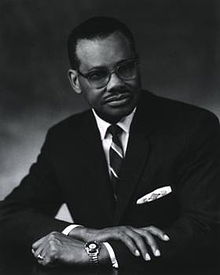 Leonidas Harris Berry (20 July 1902 – 4 December 1995) was an American and pioneer in gastroscopy and endoscopy.[1] He served as the president of the National Medical Association from 1965 to 1966.

After receiving his medical degree, Berry worked briefly at the Freedman's Hospital in Washington, D.C. And then at Cook County Hospital in Chicago, Illinois where he specialized in gastroenterology and retired in 1975 as chief of endoscopy and senior attending physician.[1] Berry lived in Chicago since his return in 1931, working at the Michael Reese Hospital, Provident Hospital, and the University of Illinois Medical School.

In addition to his long and distinguished medical career, Berry was active in teaching, writing, and community public service. The latter included work in civil rights, on the racial problems of public health, and with the African Methodist Episcopal Church. He was also the author of a genealogical history of his family I Wouldn't Take Nothin' For My Journey: Two Centuries of an Afro-American Minister's Family published in 1982.

In the early 1950s Berry started during his presidency of Cook County Hospital's Physician Association the "Berry Plan", a citywide movement which provided medical counseling clinics for the prevention and follow-up care of young drug users. It was implemented and operated by the Illinois State Department of Health.[3]

Berry's papers, which were given by him to the National Library of Medicine in 1986, centered on Berry's active professional and civic life. While the earliest copies of family material date from the 1890s, the bulk of the collection dates from the 1950s. Included are correspondence, photographs, newspaper clippings, publications, and lectures.[4]

Double click on any word on the page or type a word: